For a better experience please update your browser.

Your browser must have cookies enabled otherwise you will not be able to login or register. Please enable cookies in your browser and then refresh the page to continue.

Tickets are currently unavailable to purchase.

Your data is being transmitted securely via a strong 256-bit encrypted SSL connection.

Total booking fees comprise charges for IT services, credit card charges and/or other administrative fees allocated by the event organiser

From the Jackson 5 to the King of Pop - Michael Jackson’s greatest hits performed LIVE!

Saluting 30 years of arguably Michael Jackson’s best album ever. . . Bad sold 500,000 copies within just five days of its UK release. It was No1 in 25 countries, selling 45 million copies. Five of its songs topped the charts here and the supporting tour grossed £100m.

Forever Jackson captures the moment with superb musicianship, electrifying choreography and stunning video and special effects.More than that, it takes you from TheJackson 5, through The Jacksons and on to MJ’s rise to become The King of Pop.

Bad’s The Way You Make Me Feel, Man in the Mirror, Dirty Diana, Smooth Criminal, Another Part of Me and its title track climax a brand-new production that also features Thriller, Beat It, Billie Jean, Can You Feel It and many more.

         * Looks – exactly like Michael. . . perfected thanks to three-hours in make-up and elaborate, finely-detailed costumes

         * Moves – just like Michael. . . mirroring every move, from the legendary dance moves right down to the smallest mannerisms.

As seen by Michael at his lavish 45th birthday celebrations! 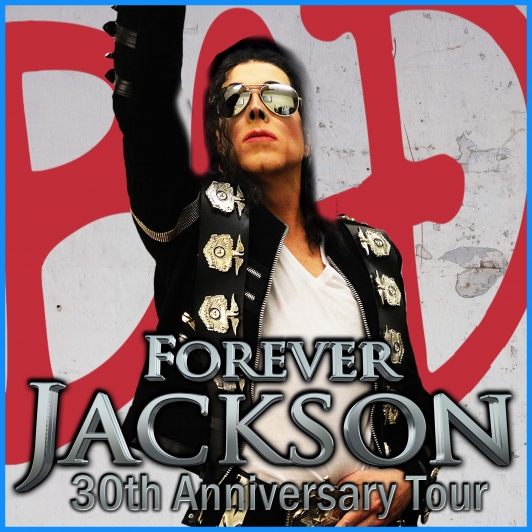