Due to the demand for their faithful reproduction of Pink Floyd’s classic music, The Darkside of Pink Floyd are a regular feature at major National music venues, festivals and theatres. They were also the first band to play a live public performance inside the prehistoric caves of the world famous Kents Cavern and they’ve had five sell-out concerts deep underground at Carnglaze Caverns as part of their highly acclaimed ‘Echoes of the Past’ tour.

The band are regulars at the World’s Biggest and Best Tribute Festival, having played and headlined, to capacity crowds at Glastonbudget for the last six years. The show has received rave reviews from audiences and critics alike…

“the best Floyd show I’ve seen in 25 years . . and I’ve seen them all” – Brighton Magazine.“WOW . . Absolutely fantastic ! Put them on your must see list” – BBC Radio Cornwall.“A more intense tribute band than The Darkside of Pink Floyd is hard to imagine” – The Stage.

…and some lovely words from a fan in Devon, “saw these guys at the BMAD festival last summer, I’d gravitated to the beer tent drawn by the opening chords of Floyd’s Speak to Me that some enlightened soul was apparently playing through the PA. Not until inside did it become apparent that this was not the CD but being played live on the stage! The band was The Darkside of Pink Floyd, and they were stunning, delivering a cultured, authentic and beautifully produced set of Floyd classics to a packed and enthusiastic audience that just kept growing throughout the performance as people young and old were drawn to the large stage. You will have to travel a long way to see a better Floyd Tribute”.

The Darkside of Pink Floyd have played sell-out shows during 2019 and are currently rehearsing new material for their extensive 10th Anniversary Tour of the UK. The touring show now has an all new, fully automated laser light and classic Floyd video show together with a larger circular screen at venues that can accommodate its size. Come and get ‘Comfortably Numb’.

The band line up was finalised in 2009 and after an intensive period of rehearsals started to play local gigs where they quickly realised that there was a huge demand for well-played Floyd music. 2010 saw them receiving invitations to perform at various music festivals including the well known BMAD Bike and Music Festival on Paignton sea front and the band also headlined the three day StarFest in Cambridge.

In 2011 The Darkside of Pink Floyd became the first band to give a public performance inside the show caves at Kents Cavern, which is recognised as one of the most important palaeolithic sites in Europe. The atmosphere inside the caves lent itself perfectly to an evening of evocative music and stunning lighting displays. Pure magic.

2012 saw them evolve into a highly professional and well respected touring band. They were also nominated as Best Tribute Act in the South West Music Awards.

2013 saw the band “come-of-age” – they performed to a packed-house on the main stage at Glastonbudget in May, the World’s biggest tribute band festival.

2014 was busy with Headline slots at plenty of Festivals, and the band rehearsed new material to bring into the set. This gave them well over three hours of classic Floyd songs to choose from. The light show was also upgraded with a new, larger circular video screen incorporated and a new promo pack was prepared for agents and larger theatres. All still very exciting.

2015 had the band venturing out to a wider audience with theatre bookings being made. A third visit to the major Glastonbudget Festival, together with an amazing underground event at Carnglaze Caverns took place in May. Tour dates were included for ‘double-header’ concerts with top Fleetwood Mac tribute, Tango in the Night – these were highly successful.

Moving on . . . 2016 – 2018 were incredible years. The band now developed a full-on stage Show and also incorporated more technical improvements along the way. The new light show was completely automated to run perfectly in-time with the music and video sequences; this made a huge difference and added coherence to the show. The Darkside of Pink Floyd also headlined the Saturday Main Stage at Glastonbudget, putting on an incredible performance to over 15,000 happy festival souls. Sell-out shows were the norm during 2018 and 2019. And now that 2020 has arrived and the band are performing in venues across the UK, including the incredible Sheldonian Theatre in Oxford, and have now truly become one of the UK’s best touring tribute acts. 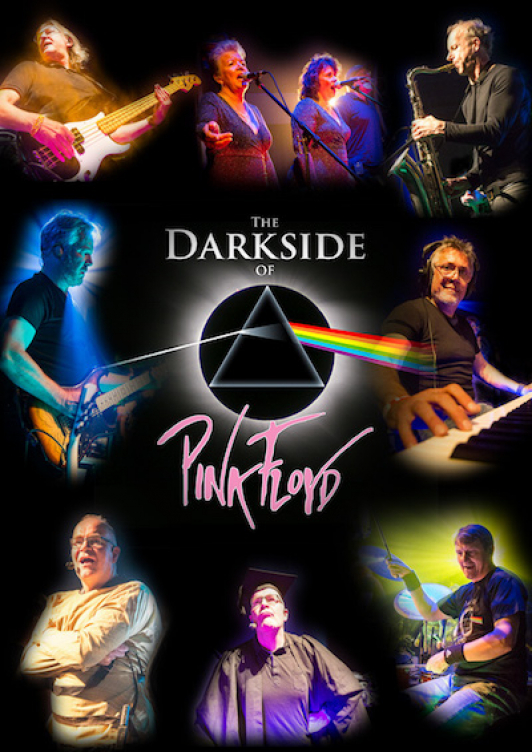