The 30th May 2020 sees the 14th Reunion for the Village Blues Club which ran at the Roundhouse, Dagenham from 1969 until 1975 with Wishbone Ash managing three appearances at the club between 1971 and 1972.

Since those heady days the Village as it was commonly known has held annual reunions and on May 30th 2015 Martin Turners Wishbone Ash made an appearance at the sixth reunion to a sold-out crowd in the music bar of the pub.

Gladly the original hall now houses the reunions and we are delighted to welcome Martin Turner ex Wishbone Ash and his band back for what will no doubt be a night no Wishbone Ash fan would want to miss!

Martin Turner and his band return to the concert stages to celebrate the 50th anniversary of the formation of the original Wishbone Ash and perform another classic album in its entirety – 1971’s Pilgrimage.

Wishbone Ash was formed by West Country musicians Martin Turner and Steve Upton, who arrived in London in 1969 to embark on their musical journey. Intent on creating a musical sound that was rich in texture and melody, Martin Turner envisaged the band’s innovative harmony-guitar hallmark and guitarists Ted Turner and Andy Powell were recruited via a now legendary Melody Maker advert. The partnership of the original line-up of Wishbone Ash forged a unique musical identity that would produce some of rock music's best loved works and influencing numerous successful bands, resulting in millions of album sales and concert attendances. Wishbone Ash would become one of the most enduring British rock acts - its name synonymous with high quality guitar-driven melodic rock music.

Five decades later, the music of the classic line-ups of Wishbone Ash continues to delight audiences worldwide through both live performances and a rich legacy of recorded work that continues to be enjoyed by fans old and new. Classic album releases such as Wishbone Ash, Argus, Pilgrimage, There’s the Rub, New England and Live Dates defined the Wishbone Ash sound and have touched the hearts of several generations of music fans. As lead vocalist and key creative force, founding original member Martin Turner was central to the critical and commercial success of Wishbone Ash’s most revered albums, with his passionate vocal delivery, songwriting ability, keen melodic sense and production values being major ingredients in the definitive Wishbone Ash sound. Martin Turner continues to perform the band’s best loved works with his current line-up, which features guitarists Danny Willson and Misha Nikolic, and drummer Tim Brown.

In recent years Martin Turner has delighted audiences worldwide with his performances of material from the classic periods of Wishbone Ash’s history.
Martin’s touring continues his exploration of the Wishbone Ash catalogue and follows the release of a deluxe 30-disc Wishbone Ash career retrospective CD
boxed-set entitled The Vintage Years 1970-1991 as well as Martin Turner’s 2016- recorded 2CD/DVD package The Beauty of Chaos – Live at the Citadel.
The Wishbone Gold tour will see Martin and his band performing 1971’s iconic Pilgrimage album – as well as other favourites from the classic era of Wishbone Ash, including Argus highlights.

Released in September 1971 and featuring the celebrated original Wishbone Ash line-up of Martin Turner, Steve Upton, Ted Turner and Andy Powell, Pilgrimage built on the creative and commercial successes of the band’s 1970 debut album Wishbone Ash and paved the way for the classic 1972 album Argus and earned the band “Best New Band” awards in the UK’s music press. Featuring a diverse range of influences such as blues, jazz, folk and rock, Pilgrimage contained mainstays of the Wishbone Ash’s live set such as “Jail Bait” and “The Pilgrim” as well as fan favourites “Vas Dis” and “Valediction”. Resplendent in its distinctive Hipgnosis-designed album sleeve, Pilgrimage reached number 14 on the UK album chart. 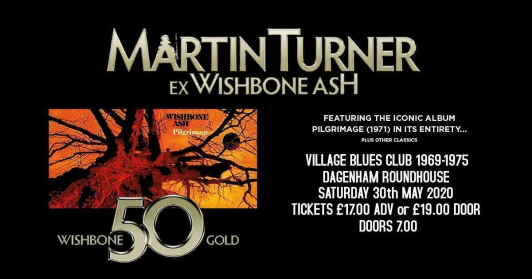